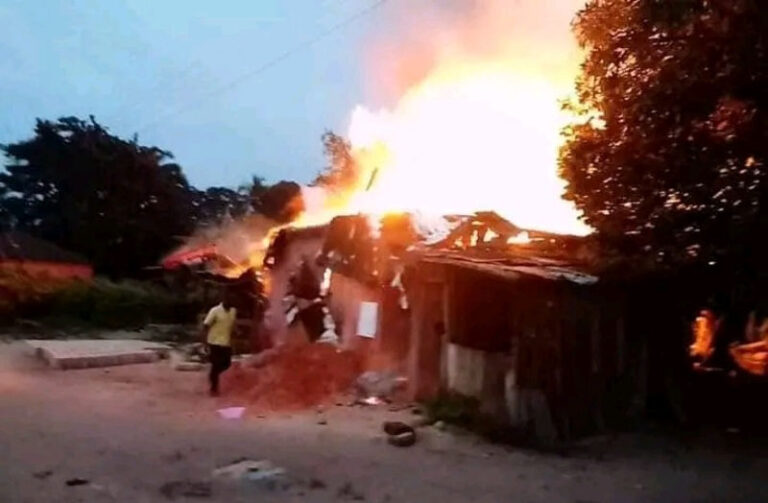 About two people were killed on Saturday when Nigerian troops invaded two communities in the southeast of the country.

Military authorities would later claim that the three people killed were members of the outlawed Indigenous People of Biafra (IPOB).

In the latest attack, troops are said to have invaded Orsu-Ihiteukwa again at around 4 am, with numerous combat vans, armored tankers, and military helicopters.

Residents said troops were firing and detonating bombs as helicopters flew over communities.

Gunfire and shelling were said to have disrupted a burial ceremony, prompting guests to run into bushes for safety.

According to a PREMIUM TIMES report seen by OHAFIATV News, the operation was carried out in collaboration with members of Ebubeagu, a security outfit backed by the Imo State Government.

One resident, Ifeanyichukwu Edurumba, 23, is said to have been taken from his home at around 12:00 pm and dragged to the market in Orsu-Ihiteukwa, where he was allegedly killed by troops.

His uncle’s wife, Ifeoma Onyebuchi, who was staying with him, narrated what happened.

“We were inside the house when we heard that people from the army were coming to the community. So, he (Edurumba) left his poultry farm and ran inside for safety. While we were inside, some people came and knocked on our door. They were a mix of army people and members of Ebubeagu, all in their uniforms.

“They ordered us to open the door when I asked who they were. They quickly broke down the door and entered. The boy (Edurumba) ran under the bed with some children.

“One of them told us that if we don’t bring the child, they are going to kill us all. I told them that the boy is an orphan and the only son of his deceased parents and that he is a poultry farmer and also an iron bender. I told them he didn’t do anything wrong.

“While I was speaking, they entered the room and dragged the child out and took him away. They checked the boy’s poultry when they heard his chickens clucking. They then took the boy to the Eke-Ututu market and killed him,” he said.

‘They killed another child’

Another resident, who said he witnessed the troop invasion, spoke to PREMIUM TIMES on Sunday.

“Another child was also killed in Orsumoghu, a neighboring community here. I still don’t know his name,” he said.

He said he came face-to-face with the troops while going to the market to buy an item, but hid from them fearing they would kill him.

“They were burning houses and stalls. They used some hammers to smash shops and took whatever they wanted, like drinks, and then set the shops on fire.

“Whenever (the troops) come, they kill whoever they see, they burn houses. If you come to this town now, everyone is crying. They have reduced us to rubble,” he said.

Over 30 stalls were razed by troops

More than 30 stores were razed by troops, according to him.

He said it was disheartening that the Nigerian government said it was protecting lives and property, but turned around to order security agencies to kill residents and destroy their sources of livelihood.

In one of the videos, a victim, Anselem Ohaachosi, whose shop is said to have burned down, lamented the frequent invasion of the community by troops.

“Yesterday, September 17, 2022, a gang of Nigerian soldiers arrived in Eke-Ututu, Orsu-Ihiteukwa, destroyed people’s shops, property (and) lives. They set my store on fire,” he said.

Mr. Ohaachosi used to sell phones and phone accessories. He said that all the items in the store had been destroyed by the troops.

He said he took up selling telephone sets because he couldn’t find a job after graduating from Imo State University.

“Look how they made me useless at Orsu-Ihiteukwa. The cost of what they damaged here is no less than N10 million. How can I start life again?

Say no to IPOB

Ohaachosi said the troops were shouting “Say no to IPOB” during the raid.

“Am I a member of IPOB? Did you see any marks on me? I graduated from Imo State University and am also a holder of a postgraduate diploma in Education. I am a pedagogue. They have to pay for all this,” Ohaachosi said.

Another clip showed helicopters hovering in the sky.

In another clip, apparently filmed on Sunday, people, whose stores were not affected, were shown hastily removing their products from stores.

Army spokesman Onyema Nwachukwu did not return calls or a text message seeking comment on the incident.

Amnesty International Nigeria and other organizations have accused the army of extrajudicial killings in the southeast under the guise of fighting IPOB, which is leading the agitation for an independent Biafra state.