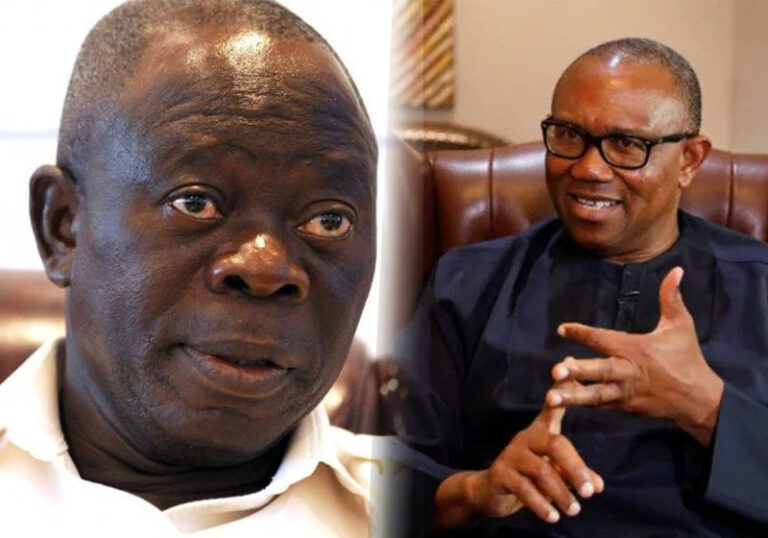 Mr. Oshiomole made this claim on Sunday while speaking at the APC Youth Summit in Abuja.

Obi, who was governor of Anambra state from 2006 to 2014, has vowed to prioritize fighting insecurity and fixing the economy if he is elected president next year.

The former governor is remarkably popular with young Nigerians on social media despite his record as governor of Anambra having repeatedly been attacked by opponents.

Obi faces Bola Tinubu of the ruling party, former Vice President Atiku Abubakar of the PDP, and several others in February’s presidential elections.

Mr. Oshiomhole, a former governor of Edo state, stated that Mr. Obi’s successor, Willie Obiano, had to embark on the forced expulsion of the hijackers from the state because the former failed to address insecurity.

He is basing his claims on videos posted on YouTube.

“For those of you who are social media warriors, go to Google and look at the first six months of Governor Obiano’s administration in Anambra State. What you are going to find on YouTube is Governor Obiano using bulldozers to demolish the houses of the kidnappers and those involved in the Bakassi boys and girls.

“Who was the governor when Bakassi developed in Anambra state? Who solved the problem? If one man failed to solve security challenges in Anambra State, which takes courage, how can he convince him that he will solve security in all of Nigeria? Don’t take it from me, go to YouTube. I don’t want to look for trouble, I’m a small man, anyone can deal with me.

“If he had solved the security problem, would Obiano be demolishing people’s houses, kidnappers’ houses? When he says, ‘I’ll fix Nigeria, ask him, have you fixed your state?’ he said.

“He calls himself a merchant, what trade does he do? Import or export? Does matters? Discover. He will meet those who brutalize the economy,” he said.