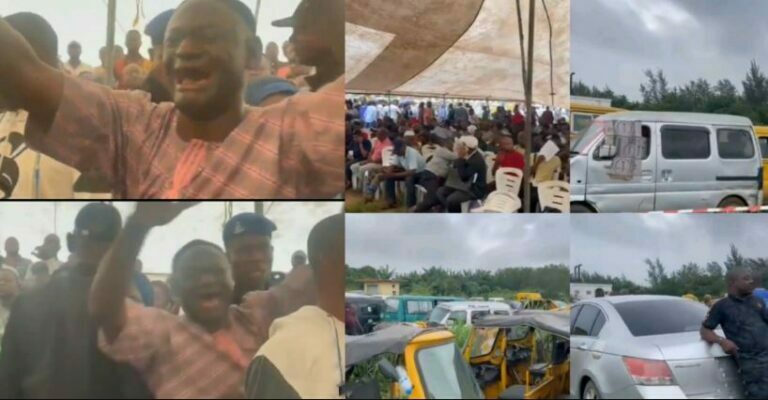 Emotions were betrayed this week as the Lagos State government auctioned vehicles that were forfeited.

At least 134 vehicles confiscated for various traffic offences were up for sale.

DAILY POST reports that as the exercise progressed, several families were thrown into agony and tears, as they watched their means of livelihood being auctioned at a giveaway price.

More touching was the case of a 49-year-old widow, Dorothy Dike and her son, Osinachi Ndukwe, who wept openly as they begged for a price reduction.

It was a sad sight beyond as their only vehicle bought at the rate of N1.8.million on hired purchase was auctioned for N450,000. In fact, but for their wailing, it could have gone up more.

More pathetic is the fact that Osinachi had earlier spent three years in prison for the same traffic offence, during which he lost his child.

Our correspondent reports that his case and that of a few others have been the subject of discussion among Nigerians, who feel that the law is too harsh on the offenders.

The Taskforce spokesperson, Gbadeyan Abdulraheem, in a statement on Thursday, explained that the enforcement team in collaboration with the Lagos State Ministry of Justice “auctioned 134 forfeited and abandoned vehicles at the Taskforce compound in Alausa, Ikeja.”

Abdulraheem said the vehicles were seized for various traffic offences, ranging from driving on one-way to willful obstruction of traffic flow across various parts of the State.

“(The) law was updated in 2020 to include outright forfeiture for driving one way,” Fawole Rotimi, a Nigerian lawyer based in the UK, told DAILY POST.

“I guess enforcement has finally started or finally caught the public’s attention.”

However, Rotimi insists that “the argument for me is that it is an unjust law.

“The punishment doesn’t fit the crime.”

Ilemona Onoja, a lawyer based in Abuja, agreed.

Onoja also feels this is likely to give the Lagos State Traffic Management Authority, LASTMA, more power than necessary.

“There are already far too many accusations of high-handedness and collusion against LASTMA and the police to extort innocent drivers in Lagos. These sorts of things give them more power to act in draconian manners,” Onoja said.

Rotimi, however, made it clear that “you can always challenge it in court. Laws get challenged all the time. But until a court strikes it down, it is the law.”

Jubril Gawat, a media aide to Governor Babajide Sanwo-Olu, sought to offer an explanation of the processes – including due process of the court of law – that lead to the confiscation of vehicles and subsequent auctioning.

“The Coordinator of the Lagos State Special Offenses Mobile Court was present at the Auction venue; she said the exercise was seamless and well organised and also disclosed that all 134 vehicles on display had gone through due process of the COURT OF LAW before being forfeited,” Gawat tweeted on Thursday.

According to him, the auction exercise is to discourage the public from committing crimes or traffic offences as no one would be spared if found wanting. He said he hoped that the exercise would serve as a deterrent to other road users who are fond of driving against traffic.

And in what is a strong warning to drivers and road users, Gawat added: “enforcement continues.