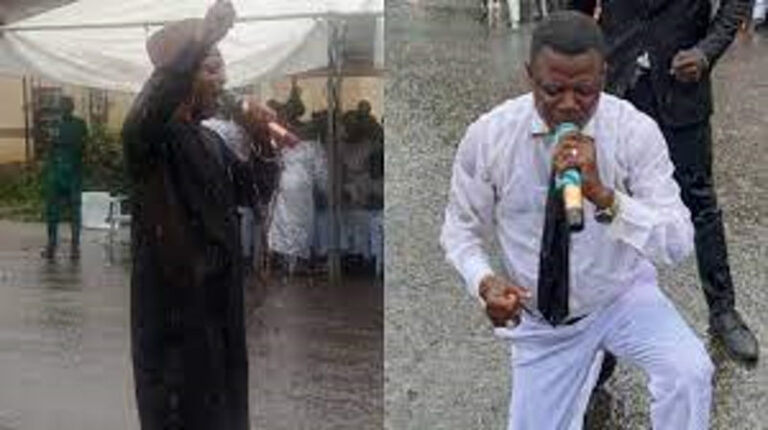 The Peoples Democratic Party (PDP) in Ogun state have taken their case to God in prayers for the 2023 general election as clerics knelt in prayer under a heavy downpour in Abeokuta.

In the session, party members and clerics who braved the rain prayed in a crusade to seek God’s support even as campaigns and elections draw near.

Members, who directed their prayers specifically towards the party’s victory at the polls, also prayed against the divisive antics of the ruling political party, especially in the state.

Speaking at the event, party secretary Sunday Solarin said that “although the All Progressives Congress, APC, has been rejected by the people, the party must guard against possible spiritual forces that might want to disrupt plans already laid by the PDP”.

He further noted that the idea of ​​the prayer session was proposed by female party leaders, noting that the idea was the first of its kind in the party in Ogun state.

Speaking to reporters on the sidelines of the event, State Women’s Leader Remilekun Olusoji said the prayer became a necessity to guide against evil eventualities during and after the campaigns.

“As you may have noticed, during the interdenominational prayers, we have begged the face of God and his protection before the campaigns begin. We have also sought the face of God for peace and love in our party.

“We have also called for the victory of all our candidates in the elections. This happened after I had a dream that required us to pray together as a party, we have done this and now we trust in victory at the polls.”

The party’s gubernatorial candidate, Ladipupo Adebutu, said that if he were running to enrich himself with public funds, he would have dropped out of the race considering the attendant stress of the referendum and eventual campaigns.

“My heart was full of pain when we started this journey a few years ago, they looked at me as ‘this little Ladi’. That ‘little Ladi’ has now become a great Ladi. We cannot thank God or pray to him enough, but with this, we have done it, may God accept our prayers.

“The next time we get together to have this kind of gathering, it will be for Thanksgiving.”

Court rules that Ex-Gov., Lamido has case to answer over alleged N712m fraud