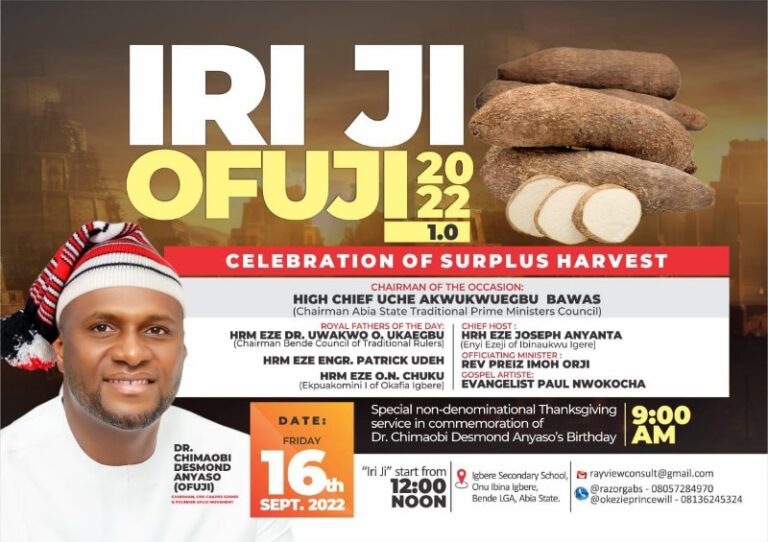 The atmosphere in Abia, God’s own state is charged and young people are excited as one of their greatest exports and And Ambassador, Dr. Chima Desmond Anyaso is set to celebrate his birthday in grand style.

This year’s celebration will feature the maiden edition of the new yam festival of the Deputy Governorship candidate of the Young Progressive Party (YPP), and will hold on Friday, 16th September 2022 at Igbere Secondary School by 10am.

IRI JI OFUJI’S FESTIVAL will be in 4 sessions which include;

3, Display of Farm Harves – Showcasing of Farmers’ yam harvest, being a “Mock-Trade Fair” where the farmers with the biggest yam size will be rewarded.

According to the release, the occasion will offer many fans, friends and well-wishers of OFUJI the opportunity to thank God on behalf of Dr. Chima Anyaso as God increases whatever you thank Him for. He further informs that the occasion is significant as new yam festival in Igbo land encourages agricultural venture, insisting that agriculture remains the mainstay of the economy.

The Organizing Chairman added that the event would be another avenue for Dr. Chima Anyaso, a celebrated philanthropist to touch lives once again like always by giving and sharing whatever He has with others.