Research: Benefits and Side effects of Bitter Kola 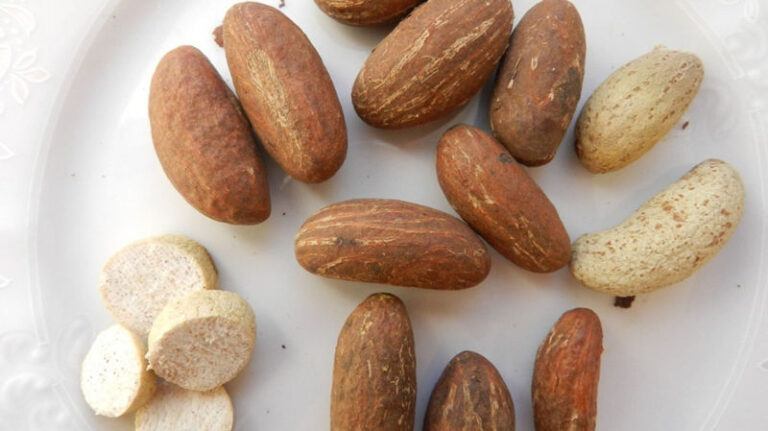 Benefits and Side effects of Bitter Kola: The garcinia kola plant, also found in West and Central Africa, is the source of the bitter kola beverage. The fact that the plant was formerly a major component of the early blends of Coca-Cola helps to explain why the two products share a name. However, the present recipe for the beverage does not contain any bitter kola in any way, shape, or form. However, this has not prevented the plant from being utilized for a wide variety of additional purposes. Because of this, a lot of individuals are interested in learning about the benefits and drawbacks that bitter kola has for the body.

It is well known that Africa has an abundant cover of vegetation, which provides a variety of resources like food, fuel, herbs, and timber, amongst others. Because of its use in medicine, Bitter Kola has been considered one of the most valuable trees for hundreds of years. One can deduce that it has a particularly unpleasant flavor simply by hearing its name, yet those who are aware of the numerous advantages it offers do not mind the flavor.

Because of the beneficial properties of bitter kola, the African plant is now grown and consumed all over the world. The plant has a variety of uses, ranging from medicinal to recreational to financial, and each of these uses is important. The following are the most significant of these advantages:

Glaucoma is a condition that is characterized by an increase in pressure within the eyeball. If treatment for the ailment is delayed for an extended period of time, vision loss and permanent blindness may follow. Bitter kola is shown to be effective in this situation by lowering the intraocular pressure experienced by patients. Because its efficacy is comparable to that of more traditional treatments, there has been a recent uptick in the utilization of bitter kola. However, persons who have glaucoma are required to seek the advice and treatment of a trained medical practitioner even when the problem does not appear to be very serious.

One of the components of bitter kola is called kolaviron, and it may be found in the plant’s leaves. It has been hypothesized that this particular antioxidant also possesses antimalarial qualities. Bitter kola was previously used by traditional healers to treat malaria infections because of its ability to inhibit the growth of parasites that cause malaria. A significant number of indigenous people from Africa continue to use nuts as an alternative therapy for malaria, particularly in locations where they do not have access to modern treatments.

Since it contains a significant quantity of antioxidants, it is capable of performing the same functions as the other chemicals that neutralize free radicals. The creation of free radicals can be the result of exposure to external stressors such as cigarette smoke, air pollution, and UV rays, as well as many other natural processes that occur within the body, such as physical activity and the immunological response. Free radicals are unstable molecules that can cause damage to cellular membranes, DNA, and even other cells in the body. Not only do the antioxidants that are found in bitter kola offer significant aid to vital activities in the body, but they also offer significant assistance to the immune system. Bitter kola is an excellent source of antioxidants. In this manner, the human body is better able to defend itself against disease-causing agents and maintain its state of overall health. This helps to explain the connection between bitter kola and pregnancy since pregnant women and their unborn children both benefit from an increase in immunity.

4. Increases the efficiency of the which lungs

One of the most important benefits of bitter kola is its ability to make the lungs stronger. Consuming kola nuts can have a beneficial effect on the lungs and, as a result, enhance ventilation levels. This effect can be brought about by chewing on the nuts. In this manner, the lungs are able to perform at their highest possible level. Because of the plant’s protective properties, it is extremely effective in the treatment and avoidance of respiratory conditions like asthma.

5. It has antimicrobial properties

Because the nuts, seeds, and leaves of the bitter kola plant contain these characteristics, the plant itself is rich in antibacterial benefits. The plant was able to successfully suppress streptococcus pyogenes, staphylococcus aureus, Escherichia coli, and Salmonella typhi when it was tested against these bacteria. Bitter kola. Saponins and tannin, two of the bioactive components found in bitter kola extracts, are thought to be responsible for the antibacterial activity that has been observed.

6. An effective treatment for osteoarthritis

The symptoms of osteoarthritis, which can range from painful to incapacitating, are one of the most common types of arthritis. Pain and stiffness are symptoms of the degeneration of joint cartilage and the bone that lies beneath it, which is the defining hallmark of this condition. In most cases, the joints in the knees, hips, and thumbs are affected. Obesity, aging, joint injury, and inherited factors are the primary contributors to this condition. Bitter kola contains anti-inflammatory and analgesic properties, making it a potential treatment for osteoarthritis-related pain and inflammation. The plant, when used on a consistent basis, can also promote joint movement, which can reduce the amount of pain experienced by persons who have the ailment.

Aphrodisiac properties have been attributed to bitter kola. This indicates that the plant possesses the capacity to improve sexual desire as well as sexual enjoyment and performance. Bitter kola has become increasingly popular among individuals who are interested in enhancing their sexual life as a result of this benefit.

8. Bitter kola and the reduction of body fat

Because of the way they eat, a lot of people have trouble maintaining a healthy weight. Bitter kola, contrary to popular assumption, does not cause an increase in body weight and, in fact, has the opposite effect. Your hunger can be suppressed by including it in your diet, and as a result of eating less, you will begin to experience weight loss.

Side effects of bitter kola

Even though there are many different ways in which bitter kola can enhance a person’s health, like any other plant, bitter kola does have certain negative consequences as well. The following is a list of some of the negative aspects of bitter kola:

1. Could lead to an increase in blood pressure

Bitter kola should be avoided by people who have high blood pressure because it can make their condition worse. This is due to the fact that the nut is rumored to contain a stimulant, the effects of which might lead to an elevation in blood pressure. People who already have hypertension are more likely to face adverse effects from this.

Caffeine is identified as one of the components that can be found in bitter kola. After taking caffeine, the majority of people will have trouble falling or staying asleep for the rest of the night. It is possible to get more awake as a result of it, but if you are trying to get a decent night’s sleep, this could be a problem for you.

Bitter kola is not something you want to consume if you have issues with diarrhea because it might make the condition worse. Bitter kola can make diarrhea worse if it is chewed in large quantities for an extended period of time.

4. Prevents blood from clotting too quickly

When taken in big quantities, kola can inhibit the body’s natural ability to coagulate blood. In the event that a person sustains an injury, this might be hazardous because it will be difficult to staunch the bleeding, which can grow into a condition that is life-threatening. Therefore, bitter kola should be consumed in lower quantities, and following surgical procedures, it should be altogether avoided.

5. Causes movements that are not voluntarily controlled (tremors)

Both the central nervous system and the peripheral nervous system are negatively impacted by the consumption of bitter kola. Anxiety, trembling, and shaking are all symptoms that come from disruptions to the aforementioned systems. As a result, the individual loses control over their body movements, which might eventually lead to a mental breakdown. Even though bitter kola has a number of advantages, the majority of consumers still rush out to the store to purchase its goods without giving much thought to the risks associated with using it. People who buy the plant may already be taking other drugs due to the widespread belief that it possesses therapeutic potential. If you are one of those people, you need to make an appointment with your primary care physician as soon as possible in order to prevent any harmful effects that may be related to the plant or the medication that you are already taking.

DISCLAIMER: This article is solely meant to serve as a source of general information and does not address any particular situation or set of circumstances. It should not be relied on in any way to make decisions of any type because it is not a suitable replacement for expert guidance or assistance. Any action you take based on the information contained on this page is solely at your own risk, and you are fully responsible for any consequences of such action!

Many terrorists killed in Katsina as Vigilante thwart attacks